I really did have a different Kid Flash related post that was going to go up today, but when I got home from work Wednesday afternoon I found two surprises. It seems my awesome wife took it upon herself to do some McDonalds searching for me and not only found the Kid Flash, but she found the Captain Cold also. So I get two new Flash related figures to review and I didn’t have to eat McDonalds to get them! That’s win win right there. The other cool thing about this is I didn’t ask for her to do it, the wife just decided to surprise me with packages of Flash stuff. 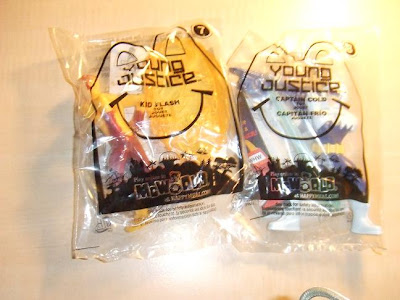 As with all the toy reviews, they get a little image intensive, so check it out after the break. 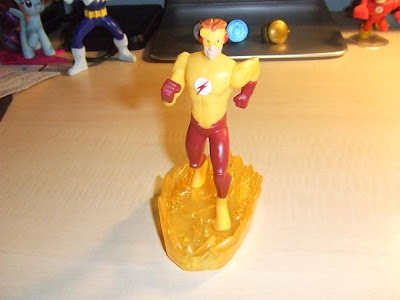 I’m going to start with Kid Flash. The first thing that surprised me was the size of the figures. Not quite as tall as a Justice League Unlimited figures, but still taller then I was expecting. His sculpt is show accurate with the goggles, shoulder pads, etc… so it is obvious that this is the cartoon version. He has four points of articulation; two at the shoulders, one at the neck, and one at the waist. There is no articulation in his legs. 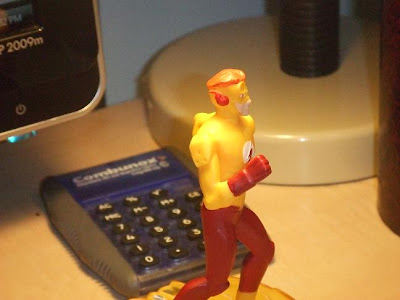 For a figure of this size, the paint application is pretty sloppy. What makes it even worse is that it covers up a lot of the details that are sculpted into the figure. You don’t see that the shoulder pads are there if you’re more then a foot or two away, they are swallowed up in all that yellow. The same thing happens with the goggles, they are painted completely yellow and blend in with the rest of the mask. 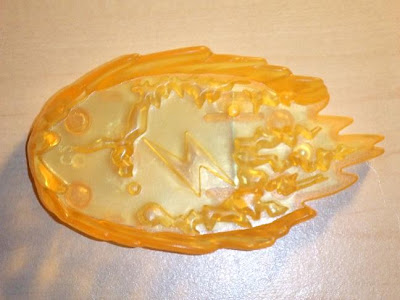 His action feature consists of a transparent, wheeled base that he can stand on. This is actually nicely done. There is a little lightning bolt symbol on the top of it. It is sculpted to look like rippling lightning and does a pretty good job of it. The base has two pegs on it that fit into Kid Flash’s feet. It does not have a pull back and go mechanism; it is just a free roller. So sending the Kid running just requires a little push. 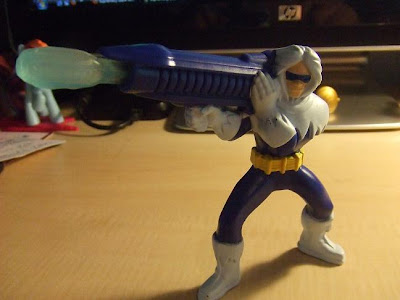 On the other hand, Captain Cold has a whopping zero points of articulation. Instead of his normal cold guns he is armed with a cold bazooka. The missile is semi-transparent and sculpted to look like ice. It is spring launched and flew a couple feet when tested. Extra points go out to whoever sculpted this, the design of the cannon looks remarkable similar to Len’s actual pistols. 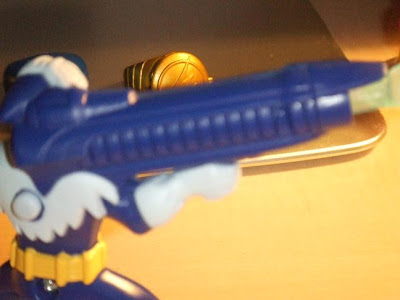 This may just be my version, but Cold’s paintjob makes the Kid Flash one look like high quality work. Besides a bit of color overlap here and there, the white on him has chipped off and spots of blue are peeking out all over the place. I can’t even blame this on me staging a rough desktop battle between action figures; the dots of blue were noticeable as soon as I opened the package.

So you can tell, I’m not exactly thrilled with the quality. There is an argument to be made that it is a Happy Meal toy, I shouldn’t expect too much. But they have produced quality toys before. Hell, the Rainbow Dash you can see in the background of the Wally picture has a great paint application on it. I’m not complaining too much because honestly, I’m thrilled to see Flash related merchandise tie-ins. 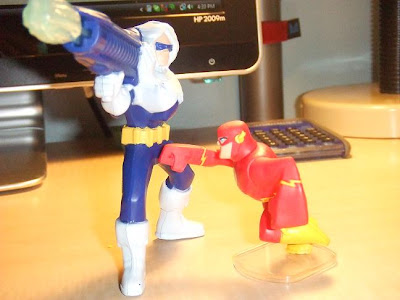