There and back again….a Hobbit’s Tale

You could write a book about the long journey it has taken to get the two Hobbit movies made. If you haven’t followed all the ups and downs I’ll give a quick version of the major happenings and delays. I think we can all agree that the Lord of the Rings movies were very successful at the box office, critically acclaimed (together they won 17 Academy Awards) and very profitable for New Line Cinema. So it only seemed natural that Peter Jackson and New Line would jump right into making the prequels. Except Peter Jackson felt that he did not receive everything he had been promised; he sued New Line Cinema in 05. It took two years for them to straighten everything out. Jackson was announced as executive producer of the Hobbit movies and then the Tolkien Estate sues New Line. That suit was settled in 09. So we lost four years to different law suits.

Guillermo del Toro was hired on to be the director in 08 where Peter would act as a second unit director. The two apparently spent a long time working on the scripts. Things looked to finally be moving on schedule. In 2010 del Toro announced he was leaving the project due to the delays causing scheduling issues in other film projects. Suddenly the two movies were without a director. Peter Jackson stepped up as director and things looked to be moving in the right direction again. 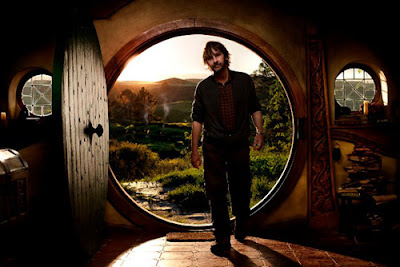 Then in September of 2010, the International Federation of Actors issued a Do Not Work order because of New Zealand allowing non-union contracts. For a time it was rumored that they would film the movie in an entirely different location. In late October everything had worked itself out though and the production was kept in New Zealand. January of 2011 rolls around and Peter Jackson has to undergo surgery to repair a perforated ulcer. Luckily he is okay, but this delays things again. In February of 2011 Christchurch was hit with a devastating earthquake, causing more then 30 billion in damages to the city. 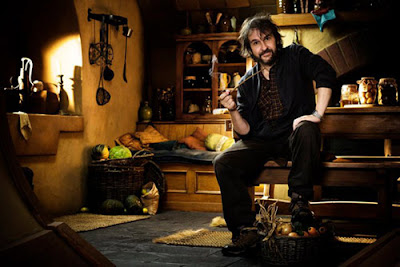 I know this seems like a long list of horrible situation after horrible situation, but there is a light at the end of the tunnel. Filming began on the Hobbit Monday. Sure, it’s expected to take up to two years to make the two movies. We aren’t expected to see the first release until late 2012, but it’s still exciting because things are finally moving. In fact, those two pictures of Jackson you see up there? He just recently posted them to his facebook page. Yeah, I’m excited, bring on Smaug.
Posted by Ken O at 8:30 AM

Email ThisBlogThis!Share to TwitterShare to FacebookShare to Pinterest
Labels: Lord of the Rings, Movies, The Hobbit