Green Lantern: The Flood part I

Get ready Lantern fans, The Flood is coming. I’m not talking about another giant crossover; that is being called something different. I’m talking about the DC merchandise machine that is about to hit your favorite toy isles. A whole lot of stuff is already been solicited for pre-order so I’m going to go over some of the strangeness today and then hit the subject again Tuesday. To be 100% completely honest I had to have a subject today that was large enough to be split in two since I’m be glued to my 360 on Tuesday. I’ll be throwing prices around in these articles, they are usually the marked down ones from the on-line retailers I’m seeing the items listed on. 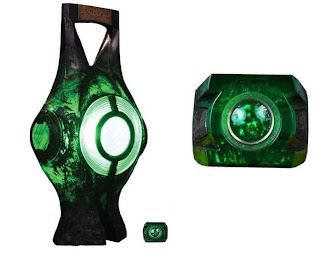 Starting with the big ticket item, how much do you love the new lantern design? Do you love it enough to spend $300? For that you also get a ring that will light the lantern when you press the ring against it. You can buy the ring itself for like $40. They say the ring is a prop replica and not meant to be worn but seriously, you spend that much on a ring and lantern you better wear the damn thing. While it is high end, as movie merchandise, it isn’t all that strange. Keep reading though.

You have your choice in paper weights. Still not strange and fairly common for big movie releases to have things like this. While I don’t like the techno-organic lantern, the other two are fairly cool looking. Not only that they are priced between 12 and 15 dollars, so a cheap alternative to some of the other things.

This is the last one that makes sense, I promise. Bookends! Again you have choice between completely sensible Green Lantern logo or the crazy flesh-sack looking new style lantern. Either one is going to cost you around $43. I could seriously see the logo one making a nice display with some of the nicer Green Lantern hardcover books. 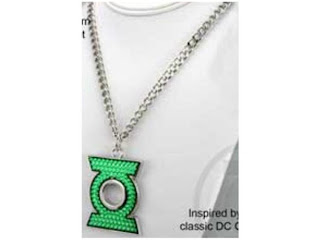 Green Lantern bling yo! A Green Lantern pave pendant for $17. Besides how silly this looks I had to look up what pave jewelry is. So if you’re wondering the same, it is jewelry that has gems so tightly pushed together that very little metal shows. Yeah. I can’t wait to see one of these in person. And it comes out in May, which means it should be readily available when Brandon’s birthday rolls around in June. 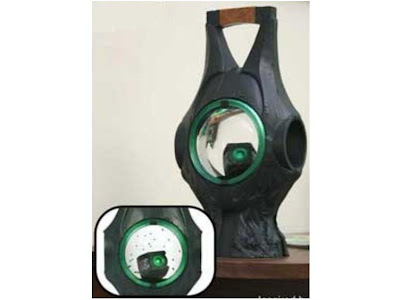 There is a thing I can not explain. It costs somewhere around $40. It looks like the crap lantern but the middle is clear. It has a ring and glitter floating around in it. They call it a snow globe. I’m still stunned by it. It’s a little too pricy to be a joke. It looks so dull that even people who like the new design would avoid it. And yet there it is. Yeah.

Remember we aren’t done yet. Tuesday we’ll look at some of the more kid oriented stuff instead of the items you’ll eventually be seeing in a Sky Mall catalogue. The Green Lantern Flood isn’t all bad. Arkkis Chummuck is finally getting a DC Direct figure. Now if only we could get a Probert figure….
Posted by Ken O at 10:52 AM