It’s Hangover Thursday, how’s your head? Get ready for it, everything is about to turn green. We’re a week away from St. Patrick’s Day and already the beer isles in grocery stores are prepping for the storm. Tons of people will be grabbing that six pack or cases of Guinness because “It’s that time of year.” And that’s fine, let the holiday drinkers go for the Pub Draught. This year if you want to drink something a little different you’re in luck. This year you can find out what the rest of the world has been drinking, pick up a four pack of Guinness Foreign Extra Stout. 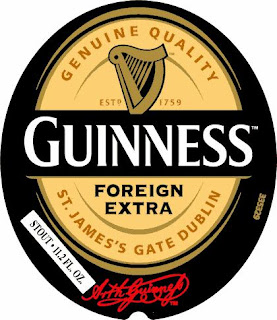 Foreign Extra Stout has been available in the states for a little while now, but I know at least in my area it hasn’t been easy to find at first. Hard to find in America maybe, but this beer makes up 45% of Guinness’ global sales. Originally named West India Porter, it is brewed with extra hops. These certainly change the flavor but were initially there to help the beer survive long oversea journeys. This allowed it to be shipped all over the world, which Guinness started doing in 1801. The other big difference is Foreign Extra is carbonated while the Draught is nitrogenated, so that changes the feel of the beer too. The ABV of Draught is 4.1%, this bad boy has a 7.5% in the states, so there is a little bit more bang for your buck. 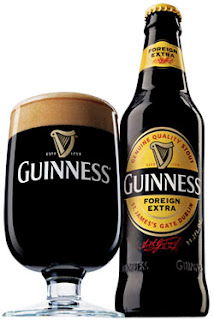 So how does it taste? Well you can definitely taste all those extra hops. You are going to get a little more bitterness then you would in the Draught. Don’t let that or the title of “Extra Stout” scare you though, this beer tastes fantastic. All of that roasty, chocolate flavor finishes off dry and a little sweet. I have no idea if this is a permanent edition to the beer isle or a limited time thing so all I can do is advise you to try it for yourself. I know I’ll be heading back to the store some time this weekend to pick up two more four packs.
Posted by Ken O at 8:27 AM