I guess I’m still in Megacon recap mode. I was a little disappointed when I visited the Stylin Online T-shirt castle at the convention because I already had all of the Flash shirts that I wanted. In an earlier Flash Friday we had already discussed how I don’t like shirts with the actual character on them.  Two days after the convention I stumbled across a series of shirts that are supposed to be out sometime this month. I realize that today is April Fool’s day, but this is 100% legitimate. In fact if you don’t believe me you can check out their website here. So what is the big news on these shirts? We now have Flashpoint shirts. 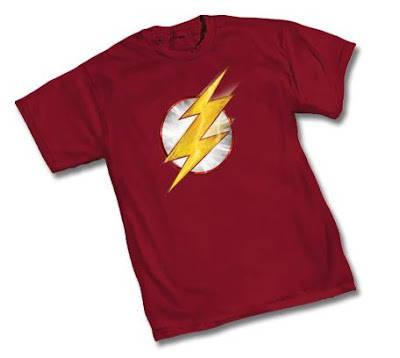 This one is a definite buy for me. If it looks familiar it’s because DC has used that version of the Flash logo in a lot of their teasers. After seeing the actual Flash logo on shirts for so long, this picture looks more like a photoshop mockup of the shirt rather then a picture of the real thing. I may be wrong though, the printing on the shirt may be just that shiny and lightning filled. It’ll be interesting to see if the stylized lighting bolt will just be used in promotional stuff of if someone will actually wear it.


There is a possible Flashpoint spoiler in the paragraph under the next shirt. I have no idea if it is true or not, it is just something I saw on the Graphitti Designs website. If you want to be careful and skip it, just head down to the Batman/Wonder Woman picture. 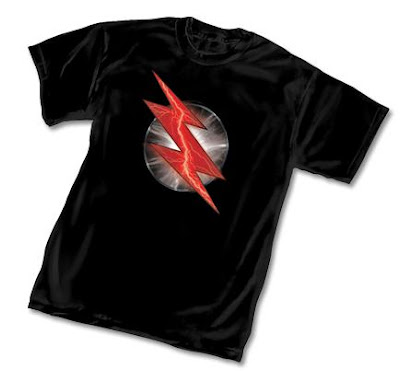 So here is the Flashpoint Reverse Flash T-shirt. Wow, that’s a mouthful. The black shirt and red lightning bolt make it look more like a Black Flash shirt then a Reverse Flash one, but I still really like it. Like the Flash one, this one is a buy for me. So what was the big spoiler news? The website actually lists the shirt as, “FLASH POINT: REVERSE FLASH SYMBOL T-Shirt (CLONE).” Clone? Is that a mistake? Is it a hint of something else happening? It seems odd that is in the title, because none of the other Zoom related stuff has ever been listed that way. It may turn out to be nothing, but I found it pretty interesting.

Welcome back to all you spoiler skippers.  Look, Batman and Wonder Woman get Flashpoint shirts! I’m so happy. Do you know how hard it is to find a Batman shirt? I mean you just never, ever see that.  I just wish they made more Batman merchandise…. Yeah, it’s a pass on these for me. They are cool looking designs though, so they should please Bat fans and Wonder Woman fans alike.

Hey, that’s not a shirt at all! Yup, I snuck in a picture of my signed copy of Rebirth. I haven’t seen Geoff at a convention in years so I jumped at the opportunity to get my Flash hard covers signed. A line with a hour and a half wait is a serious change from him just hanging out in that tiny comic room that Dragoncon used to have. As you can see Ethan also signed it for me and put in a cool head shot. I always enjoy talking with Ethan and I’m bummed out that he doesn’t live around here anymore.

That’s it for the April Fool’s edition of Flash Friday. I was going to be talking Kid Flash, but I had to get the new shirt news out there. So it’ll be next week, unless I stumble across something else that just can’t wait.
Posted by Ken O at 9:10 AM