Terror on the Blacktop

They say he came into this world from someplace off the clock.
And his mother was an ice-cold wind; his pa a fiery rock.
It's told that on some starless nights his rig could up and blow,
And folks who say they saw it coming swear they didn't see it go.
Now you hear a lot of legends told when you ride the long hard slab,
From some who say the man is good and some who say he's bad.
But all agreed who've ever tried to play a cheatin' hand;
You only get one chance to draw against "The Highwayman." 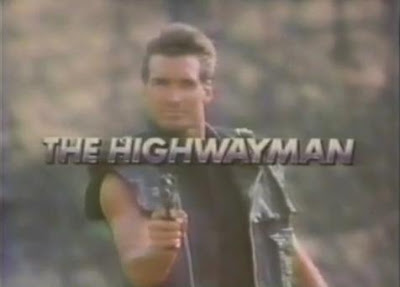 Today we look at the pilot movie for the 1987 TV show, the Highwayman. Strap in and take a look at what blew away my 11 year old mind. As with all movie reviews, this is a long one, but with a line up like Sam Jones, Claudia Christian, Jimmy Smitts, Richmond, G. Gordon Liddy, and Rowdy Roddy Pipper you won’t want to miss it. 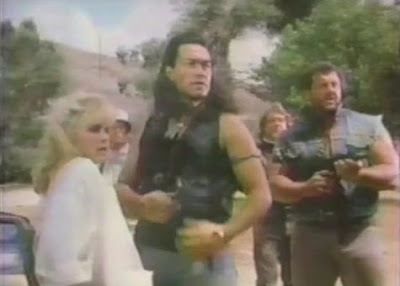 The episode opens with a blonde driving down the road in a convertible sports car. Four bikers come from off the road and force her to pull over. The bikers are Preacher (Rowdy Roddy Pipper), Iron Butt (NFL Linesman turned actor Lyle Alzado), Geronimo (Branscombe Richmond for Renegade fame), and Chromedome (Michael Berryman from the original Hills Have Eyes). They just might be the best biker gang ever. They explain to Amanda that they were in the war with her father and along with Bo Ziker, the six of them were known as the Blue Bullets. Geronimo pulls a knife on her, but the rest of the gang thinks he’s going a little too far. Even though they out number him and are all armed with guns, Geronimo backs them all down. 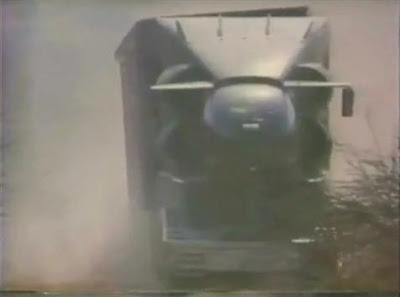 Things look bad for Amanda. Geronimo is cutting her shirt open with the aforementioned knife when they notice a very strange truck driving down the road. They do what any sane group of people does when they see a vehicle coming their way, they pull out their guns. As the semi keeps coming the Blue Bullets decide it might be better to run. The truck reaches their motorcycles before they can get to them and flattens them with no problem. Seriously, the truck looks like it is still going over a smooth road and there isn’t even a sound effect for the bikes being destroyed, it just pans to a quick shot of the smoking wreckage. 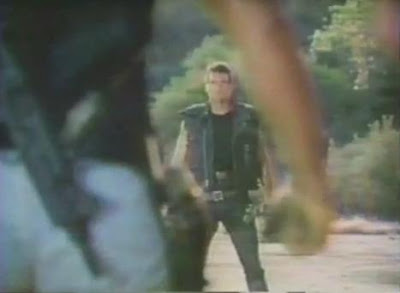 Out of the semi steps Sam Jones as the Highwayman! Dressed in leather and chains he lays down a healthy does of smack talk, “So this is what war heroes do when they come home?” and “Do you boys fight men or just women?” Highwayman backs them all down and asks where Bo Ziker is. Geronimo tells him that Bo isn’t with him today. Highway says to make sure that Bo knows that he is looking for him and then tells Amanda to get out of there. He leaves the bikers without bikes and drives off to the narration that goes like this:

Most crimes in our society begin or end on some stretch of road, where laws often terminate at county lines. Combating these legal blackouts is a new breed of lawman; working in secretly unknown, and known simply as Highwaymen. This is the story--and the legend--of one such man: The Highwayman. 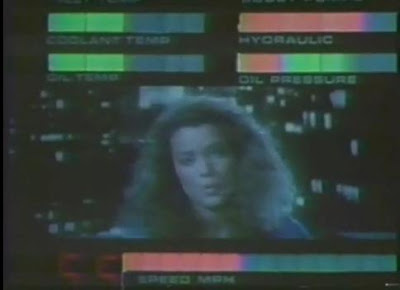 Claudia Christian shows up as Dawn, a DJ making a dedication to Highway and saying she wants to hear from him. Cut to his Knight Rider-esque dashboard and Dawn pops up on the video screen. They flirt over the video chat although it is apparently only a one way video as Dawn complains that she can’t actually see him. He tells her that he has to find Bo Ziker and she wants him to meet up with Mr. Toto. Highway is supposed to go in for modifications but is resistant to the idea. Hey look, it’s Jimmy Smitts! Jimmy is playing Bo Ziker. Bo meets up with the bikers who are enjoying some beer in what looks like a shanty town. Bo dresses them down for attacking Amanda Merrick. The Bullets argue that it is only fair after what Merrick did to them. They complain that because of Merrick that can’t get real jobs. Bo agrees that there is no legal way for them to get back at Merrick but he has a plan. Merrick apparently runs the town but has no money deposited in the bank. He does have 10 safety deposit boxes though. So the Blue Bullets decide they are going to rob the bank and steal those boxes. The planning is interrupted by Bo’s son Travis waking up. Before heading off to bed, Travis and Bo have a heart to heart about doing wrong things for right reasons. 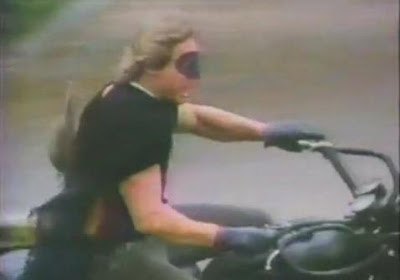 The next morning the Blue Bullets ride into town all wearing masks. Most of them cover most of their faces with old west style bandanas or ski masks, but as you can see from the picture above Preacher went Lone Ranger style. No one cares to mention where they got new motorcycles. They ride around a bit hooting and hollering before pulling up to the bank. They run into the bank and shoot open the 10 safety deposit boxes belonging to Merrick, each one of them are filled with cash. The silent alarm is triggered and the police show up. Bo lets the others act as a diversion while he heads off in another direction. In a scene taken directly from the Dukes of Hazard the Blue Bullets make all sorts of crazy motorcycle jumps while the police cars roll and crash into ravines. A helicopter is following Bo and somehow the sheriff knows it is him behind the mask. Bo is shot off his bike by sheriff and lands on the road. 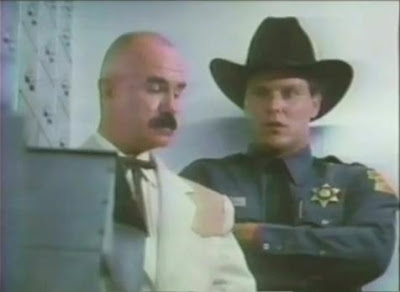 The sheriff is about to shoot Bo in the head when he tells the sheriff that he already buried the money and if he is shot, Merrick will lose his millions. Bo is taken to jail and we finally see Merrick; who is played by G. Gordon Liddy. By the way, the sheriff is played by Wings Hauser, who was in another failed TV show I really want to cover here, Space Rangers. So Liddy is playing his best Boss Hogg here, trying to figure out how those damn Duke boys knew to only hit his safety deposit boxes. Merrick informs the sheriff that Bo will never give in to torture because he’s already seen him resist it when they were in the war. He makes it very clear that if the sheriff wants to keep his job though, he better find Merrick’s money. 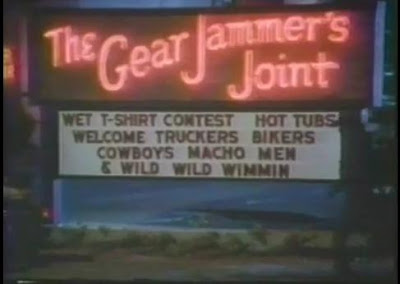 Highwayman pulls up to the Gear Jammer’s Joint. By the sign you can see this is a classy place. It’s like they took the set of an old western saloon and modernized it. Dueling pianos with identical looking piano players; one dressed in white and one in black. Highwayman enters with some backlighting and smoke. The entire place freezes when he comes in. Highway talks to bartender and when asks about Ziker the bartender says he hasn’t been in yet but his kid is sitting at a booth waiting for him. He also asks about Toto, saying he wants to avoid him. Toto is seen striking out with two bikini clad girls and Highway’s hand is seen turning up the heat in the tub. What a prankster he is!

Highway then goes to talk to Travis just as the news reports about the robbery. The report claims that the money stolen was from the local farmers and town’s people instead of Merrick’s own private stash. The sheriff claims that no one will get in or out of Gallico until they find the money. What’s going to happen? Is Merrick or Ziker really the bad guy here? You’re going to have to come back tomorrow to find out. That’s right; it’s one of those rare Sunday updates.
Posted by Ken O at 12:05 PM