More Terror on the Blacktop

Welcome to part 2 of our walkthrough of The Highwayman’s pilot movie, Terror on the Blacktop. Yesterday we ran part 1, but I’ll start with a quick recap of what we know so far. Merrick runs the town of Gallico. He somehow wronged the rest of his war buddies, who called themselves the Blue Bullets. To get him back the Bullets robbed the bank and took 10 safety deposit boxes full of Merrick’s money. The leader of the Bullets, Bo Ziker is arrested but the money was apparently the money was hidden before he was arrested. How will the Highwayman sort it all out? Read on, I promise that it only gets stranger from here. 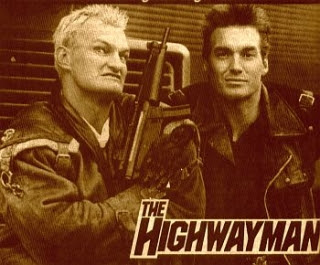 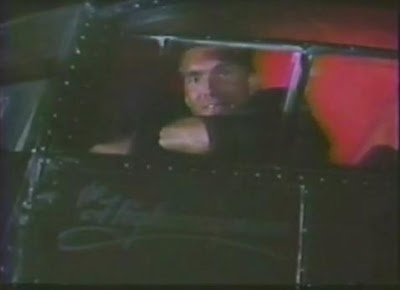 After seeing the news report about his father Travis runs out of the bar. Highwayman tries to help Travis, saying that his father has been reaching out for help. But the kid must be the smartest one ever on TV because he doesn’t just jump into the weird looking semi with a stranger. He quizzes Highway about his father. When Highway passes the test Travis jumps into the cab. They drive off with Toto chasing them. Travis remarks about how futuristic it looks in there. That’s because some of the instrument panels were actually the same ones used in Knight Rider. Dawn comes on the radio and yells at Highway for ditching Toto and telling him that he is off the Ziker case. 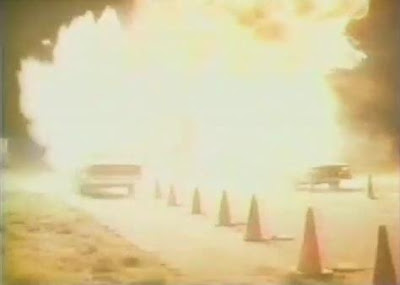 Highway decides to head to Gallico and get himself arrested so he can talk to Bo Ziker. He gets to the checkpoint and the Gallico police officer demands to see what he is hauling in the semi. Highway shows that he has a bonded load and won’t open it. He is about to drive off when the officer pulls a gun. The police are trying to open the back of the rig up when Highway pulls his gun on one of them. His gun looks is more sawed-off shotgun then pistol. Highway disarms the cops and shoots both the cars. His shotgun only needs one round each to completely destroy each car. It also makes a noise like a whistling bottle rocket each time it fires. 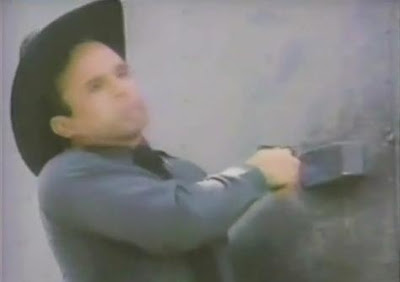 The police quickly get a helicopter on Highway’s semi and set up a roadblock. As soon as he stops four police cars drive up. The sheriff quickly beats Highway down and throws him in jail. Bo tries to talk to Highway but first Highway flushes the bug that was planted in his cell. Bo is sure that both of them will die in the jail. Highway tells Bo that he is there to help him after he had talked to Travis. The police try again to open the trailer but it is too high-tech for them to crack and it electrocutes one of them. More importantly Bo tells Highway that after the war all of the Blue Bullets started the trucking company that Merrick now owns. When they found out that Merrick was using the trucks for illegal trafficking the others confronted him only to be setup and disgraced. Bo tells him that during the robbery they found 14 million in cash. 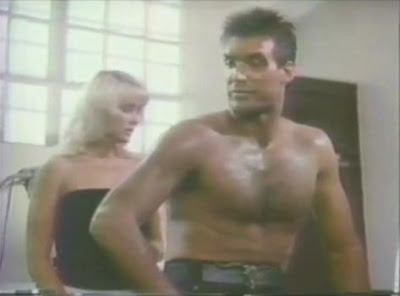 Highway is doubtful that Merrick could have 14 million just from trafficking when Bo tells him that Merrick also is doing something at the old military base. He doesn’t know what it is, but he knows that Merrick owns that land now. As the viewer, we get to see what is going on right away when the scene changes to Merrick and the sheriff in a garage full of stolen cars. Merrick is furious that a Federal agent is in the jail with Bo Ziker. Then Amanda Merrick rushes into the jail to see Highway and take him to the clinic. Amanda (who is Merrick’s step-daughter) starts cleaning up Highway’s wounds in gratitude for saving her earlier. Highway’s bosses contact the sheriff and warn him that unless he’s released they’ll send in Federal agents. 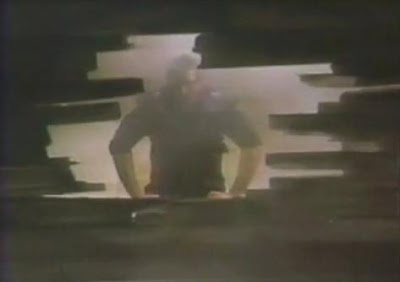 As Highway is leaving the cell Bo tells him where the money is hidden. The comedy relief police take Highway’s gun to their target range while the sheriff talks to Highway. The shotgun is so powerful that when shot at the range, it collapses part of the ceiling, which just happens to be where the sheriff is standing. Hi-jinks galore when the Highwayman is around! Highway leaves the police station but is tailed by the cops who are sure he is going to head straight towards the money. Highway contacts “Master Key” and with the help of a satellite goes full stealth. That’s correct, the entire semi-truck disappears. Needless to say he easily gets away from the cops and gets out of the county. The sheriff was obviously not happy. 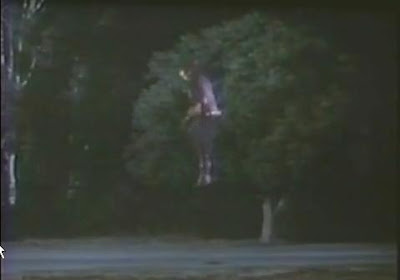 Still in stealth mode Highway drives in Merrick’s base of operations. He leaves the truck in full stealth mode and gets out to have a better look around. Highway sneaks down into the compound and hears the sheriff and Merrick talking about selling the cars to the Middle East and that there is a boat coming the next day to get them. Meanwhile in the shanty town the Bullets are thinking that Bo may have betrayed them. Highway comes in and after a standoff with the Blue Bullets tells them about how he wants to bust Bo out of jail. Geronimo doesn’t want to listen to Highway and tells him that he is in charge of the Blue Bullets now. For them to help Highway he’d have to beat Geronimo in “combat” and Geronimo would be the one to pick just want kind of “combat” it was. 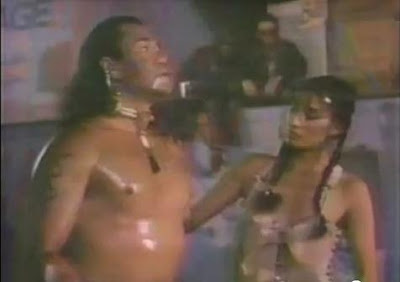 So what kind of “combat” does Geronimo want to have? This is how Preacher describes it, “I will repeat the rules of the game so there is no doubt that the fight will be fair. First a deadly rattlesnake will be pitched inside a darkened arena. You each have a razor sharp knife and one hand tied behind your back. You will enter an arena completely sealed from light. While inside the darkened chamber you will only have your senses of smell, hearing, and touch to seek out the other while avoiding the snake.” Both men are shirtless and oiled up with “snake repellent”. The girls oiling up Highway look like typical 80s rockers while Geronimo is being oiled up by Pocahontas. The “arena” that Preacher was describing just looks like a shipping crate, which is what most of the shanty town is made out of. Before the fight Travis warns Highway not to fight Geronimo, that he can’t win that fight. Highway instead locks Geronimo in the shipping container and proclaims himself the winner. Everyone laughs while Geronimo is locked in with a rattlesnake. Geronimo emerges with a dead snake, Highway apologizes to the snake, and everyone laughs again. The two shake hands while all of shanty town is still laughing. 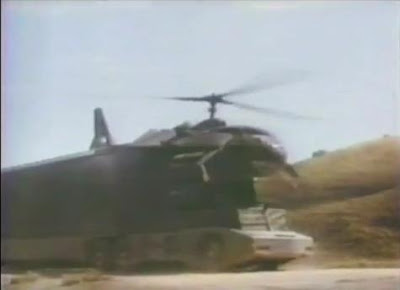 Highway pulls up to the police station in his truck and shows up with a Federal warrant. He strikes a deal with the sheriff to take Bo into his own custody. Bo is supposed to lead him to the money, so that can be given back to the town, and then Highway would take Bo to the Federal Penitentiary. Highway is sure that the sheriff will kill both him and Bo once the money is recovered, so he leads him away from it. Highway leads the sheriff’s men far out of the town. He then camps out in the heat while the cops watch on. All but one of the police cars overheat and Highway decides to leave with the fake bags full of steer manure he had left there that morning. Highway drives back into Gallico but is told that the road is out and he’ll have to take a detour. The detour leads into a huge police roadblock with all of the police armed with rifles. Highway starts pulling levers in his rig and the front opens up to reveal a helicopter! Highway flies away with ease and then starts shooting the police cars. Remember, each shot from his uber-gun is capable of destroying a car and he shoots all of them. 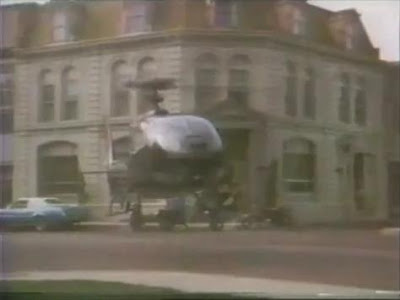 We get some shots of the helicopter flying through the air and finally it ends up back at the Gallico jail where the rest of the Blue Bullets are waiting. Highway and Bo go back into the safety deposit box area and we see that Bo had hid the money inside unused safety deposit boxes. Highway returns the bank’s money and the Bullet’s leave with Merrick’s cash. Merrick is leaving with all the stolen cars when the sheriff tells Merrick what’s happened. Merrick and the sheriff take off in the car hauler and Highway starts to chase them down no w that his vehicle is back in rig form. Merrick tries to cut Highway off on a mountain pass and instead the car carries and all it’s cars go down the cliff instead. The entire thing ends with an explosion. 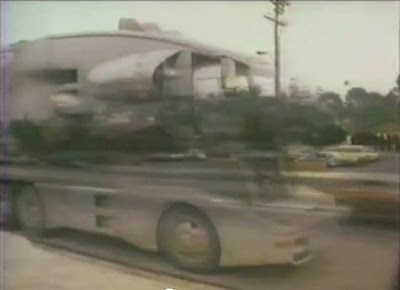 Everything works out okay for the Bullets in the end and Bo is even made the new sheriff. Amanda tells Highway she is going back to medical school and hopes he gets up to New England soon. The ha-has aren’t over yet though, because as Travis is playing in the rig he manages to call in a “full stealth” request and the rig disappears in front of everybody. The episode wraps up with Dawn and Highway flirting again and a montage of Highway driving towards New Orleans (where Dawn just happens to broadcast from).

And that is it for Terror on the Blacktop. Like a lot of television pilots it differed from the nine episode show that followed. Toto and Dawn were never seen again; instead there was a new boss and technical expert. Full stealth was dropped from the rig’s arsenal of technology too. The biggest change was the addition of Highway’s partner Jetto; played by Mark “Jacko” Jackson. Jacko had about 15 minutes of fame in the US for being Australian and saying “Oi!” Anyway, hopefully you enjoyed the look at the pilot and the extra Sunday update.
Posted by Ken O at 8:54 AM