Happy Flash Friday everyone! Just when you thought you were done eating chicken nuggets and checking back every week for Flash toys McDonalds is at it again. It isn’t more Young Justice toys; instead we’re getting a second wave of Batman the Brave and the Bold toys. It seems weird that we’re getting more toys from a show that even if all the episodes haven’t aired yet, is pretty much finished. I may be saying that though because I didn’t want it to end.

The Golden Arches are switching things up a little bit this time around. Every Brave and the Bold toy set actually has three pieces to it. Some times it’s two people and a car, other times it is just three people. There are two sets that will be of interest to Flash fans. The first one we’ll look at is the pack of Batman, Robin, and Gorilla Grodd. Just from the picture you can see that these things are going to be pretty small and the paint apps will probably be pretty scary. I do really like the Grodd design in Brave and the Bold though, but I already have a fantastic version of it with Action League figure that came out, so I’ll probably pass on this.

Next up is Batman, Sportsmaster, and the Flash. Before I even talk about the figure I’d like to point out how Flash fans get the shaft here. The set that Aquaman comes in contains Black Manta; so Aqua fans are set with just one set. The split the Flash characters between the two sets and it makes me sad. Again you can see how simple the paint apps on these guys are, Flash’s belt looks like it may be molded on, but it is unpainted. Of course he is in a running pose, in a figure with no articulation that is the way you’d want it I suppose. I want to say I won’t spend my days tracking this little guy down; but I most likely will. 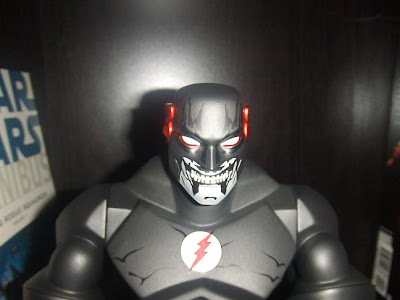 No, there isn’t a Black Flash happy meal toy; I would spend days tracking that down. I just wanted to ramble for a moment. I’ve been going through some stress at the work place, everything will be fine in the long run, just hit a rough patch in the status quo. So my state of mind hasn’t been as upbeat as always. Yesterday I was wearing my Black Flash shirt. As I’m waiting for the elevator a guy walks by and says, “Hey, Flash Gordon.” We’ve talked about that pain before, so I managed a weak smile and said “hey” back to him. 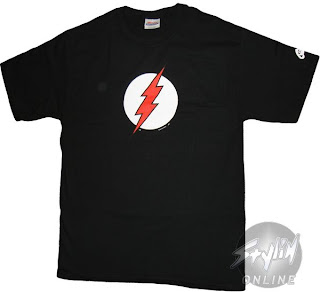 Three hours later I’m walking out of the toy isle in target and they guy working there says, “Cool Black Flash T-Shirt, I’ve never seen one of those before.” I froze in shock and when I recovered we stood around talking a few minutes about the Black Flash storyline. The guy didn’t know it, but he managed to make the whole day better. I probably should have told him.
Posted by Ken O at 7:01 AM