It’s Hangover Thursday, how’s your head? Today we are going to be talking about beer, lots and lots of beer. Worlds of it in fact. World of Beer is not a wonderful new theme park expansion it is a chain of bars that is opening new locations all over Florida. I first heard of them when they were one of the sponsors for an Irish music festival last year. I was intrigued to say the least. As time passed I kept hearing about the amazing beer selections and I knew it would only be a matter of time before I checked it out. 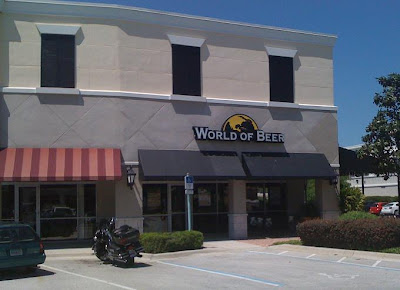 It all started in 2007. Pensacola residents Scott Zepp and Matt LaFon opened the first World of Beer in Westchase, Florida; for those not living in the sunshine state that’s close enough to call it Tampa. The World of Beer concept was so popular they were quickly franchising it out. As of this writing there are 17 World of Beer locations currently open and 1 more scheduled to open this fall. 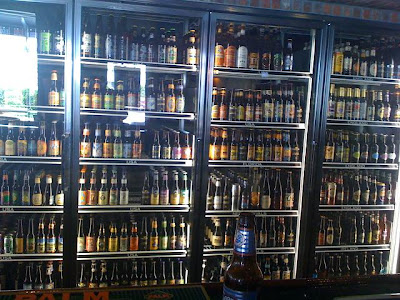 The set up of the World of Beer I visited had a cooler on each side of the taps. The picture above is the case that was on the left hand side. A place that offers over 500 beers has a whole lot of selection. On the bar are menus that don’t just show what is available but teach the beer novice. Before the beers are even listed it breaks down the different types and what kind of flavors you can expect from that kind of beer. Then the list tells you the name of the beer, where it’s made, what style it is, the size of the bottle, and the ABV%. The bartender I was talking to there says they go through like a two day class just so they can answer questions about all the beer styles. 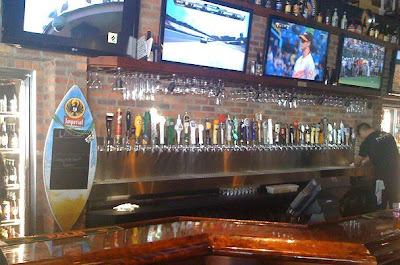 I was impressed with my favorite local bar’s 20 taps; you don’t need to count the ones in this picture, there are 40 of them. World of Beer also has a Loyalty Card Program. It’ll cost you 15 bucks to start, but you’ll get some kind of World of Beer merchandise when you sign up. I got a nice T-shirt but a friend who had signed up earlier told me he had gotten a hat. Once you sign up you’re on your way to earning more stuff. For every different beer you drink you get another point. 50 beers gets you a “50 Club” shirt, 100 gets you a “100 Club” shirt and beer mug, 250 puts you on their wall of fame and another shirt. The big prize is at 500; a party in your honor with a $250 bar tab. 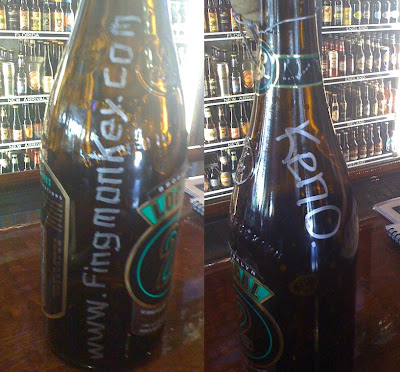 If you order one of the larger bottles, they hand you a Sharpie and let you decorate it. Then it ends up on one of the upper shelves for the rest of the world to see. Before I even knew they were doing this I had ordered a bottle of Brooklyn’s Local 2. The beer was delicious, I highly recommend it. As you can see in the above picture I immediately slapped the website url on there. Adding my name to it was an afterthought.

That’s it for this week. If you have a World of Beer in your area I recommend checking it out. If there isn’t one in your area, the way it is growing that may be changing soon.
Posted by Ken O at 9:28 AM