Happy Flash Friday everyone! I’ve been covering a lot of strange merchandise this week for some reason and figured I’d continue with that trend today. Have you been walking around your house or apartment and been thinking to yourself that you need giant representations of your favorite superhero staring back at you? If so then today’s article is definitely for you. If not, read it anyway and marvel at the strangeness. 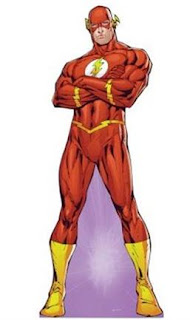 Advanced Graphics is a company best known for its cardboard stand ups. You’ve seen them before, the Star Wars characters or the Elvis and Marilyn Monroe stashed away in the corner of every Spencer Gifts. Apparently they decided to jump aboard the superhero train. Pictured above is their Flash stand up. Considering he is a pre-order at the online retailers I’ve seen I’m amazed this isn’t Barry. Now instead of always asking DC where Wally is, you can take him home! 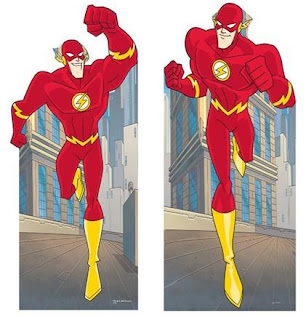 Maybe the animated style is more your thing. Advanced Graphics has you covered there too. In fact they have you double covered because you have your choice of two different animated Flashes. I’m having a hard time figuring out why they felt they needed to make two and then pick such similar poses. The background is obviously taken from the same image, they just moved over a little. Look closely at the buildings, they are identical. 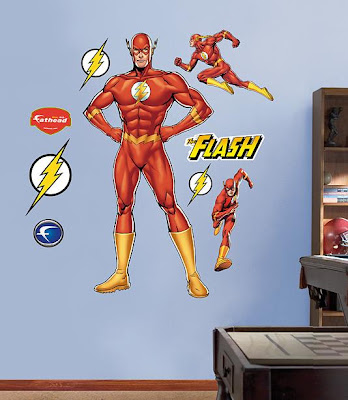 I hear what you’re saying. Sure cardboard stand ups are nice, but haven’t you found something I can stick directly onto my walls? I sure have. Fat Head is a company that makes giant vinyl wall stickers. They are primarily known for doing sports figures but as you can see above they have superheroes pretty well covered too. The Flash kit will run you 90 bucks. The dimensions on the site list the height at 6’4”, so that Flash is absolutely huge. The site calls them low adhesive and claims they can actually be pulled off the wall and used more then once. I don’t really want the full set but my Flash wall would probably benefit from the logo and one of the symbols. 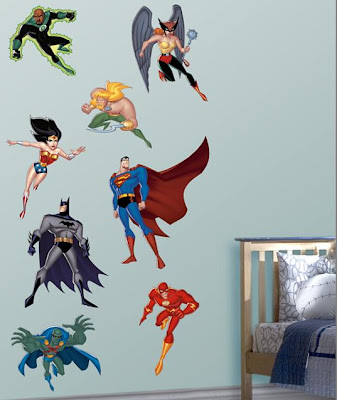 They also have a Justice League set. It includes the JL members you see in the picture up above. This one seems like they missed out on a lot of potential. Instead of doing one set they should have done two; mixing heroes and villains. Then you could pretend your wall was a giant colorform set and stage an battle between everyone. I’m also surprised they don’t have a set that is just made up of all the superhero symbols. 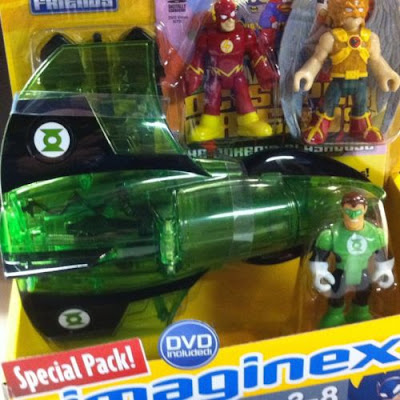 I’m breaking from today's theme to let everyone know that the Imaginext Green Lantern stuff is hitting Target shelves. The Oa playset is adorable with its B’DG and Kilowag. The item that will interest Flash fans though is Target has an exclusive package that bundles the Green Lantern jet with Flash and Hawkman minifigs. It also comes with a DVD of the cartoon Joker's Playhouse, if you haven't heard of it check back next week because we'll be reviewing it on Tuesday.

That’s it for this Flash Friday. Hopefully you enjoyed the look at some of the home décor stuff. Next time we come around to this topic we’ll cover all the Flash lights that are out there. I mean Flash themed lights not flashlights, but you probably already figured that out.
Posted by Ken O at 7:21 AM