Just when you thought it was safe to go back on the internet, Tales from the Brain Jar has returned! It has been far, far too long since we’ve done this and there are some of my favorite sketches coming up soon. Today’s sketch marks the first time in my sketch book that an artist has a second entry. That artist is Chris Moreno. 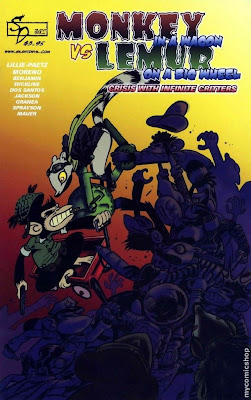 So when I saw Chris at the FX in 07 I knew I hat to get a Gorilla in a Submarine sketch. I don’t know what draws me to him. Maybe it is that giant body shoved into the smallest part of the sub. You can imagine the little legs dangling in there. It could be the massive arms that actually hang down past the sub itself. Regardless of why, it is fantastic. You can see my enthusiasm for Gorilla in a Submarine in Chris’ quote of, “To Ken, Happy now?” Yes Chris, I’m very happy. 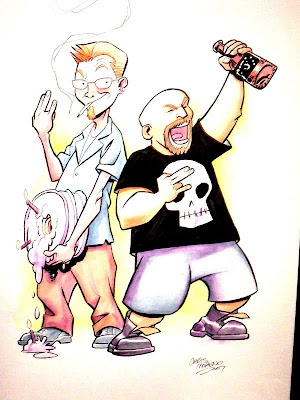 Want to see more of Chris’ work? Check out Super Frat! I don’t think I’ve ever run the full-sized picture he did of Brandon and me. That was a convention commission. You know I don’t think I ever mentioned that Chris is mostly responsible for giving Brandon the Cake Fucker nickname. I’m just dropping all sorts of strange trivia today. Seriously, if you’re at a convention on the West Coast and Chris is there, you need to sketch. You won’t regret it.
Posted by Ken O at 11:25 AM