Happy Flash Friday! I ended last week’s Flash Friday with a mention that Target was not packing the Flash, Hawkman, and a DVD in with the Imaginext Green Lantern jet. After spending two days talking about the DC Super Friends cartoon on the DVD, I figured I was pretty much done with the topic. You see I had pulled out the DVD, but everything else had still been left in the package. It’s been a busy week and I just didn’t really have much time to really look at it. Once I got him out of package I knew I had to write about him, even if it wasn’t a very long article. 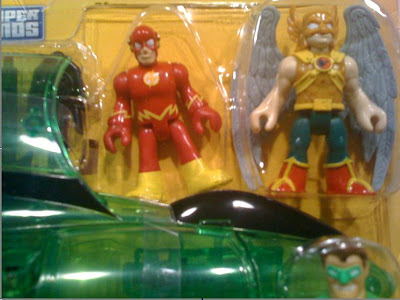 We’ll get the “which Flash is it” portion out of the way before we go any further. This little guy is sporting dark red, white eye lens, a more V styled lightning belt, and the simplified lighting design. Considering his behavior in the DC Super Friends cartoon I’m going to say you could safely call this Wally. There are no bio cards or anything with the packaging though, so honestly you could call him what ever you wanted. 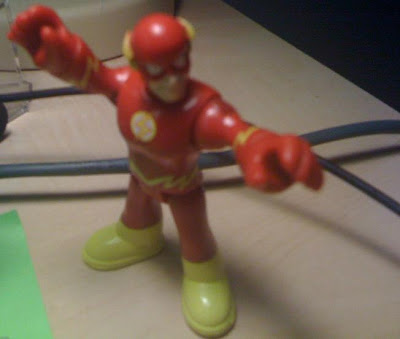 The thing that surprised me about the Imaginext Flash is the amount of articulation it has. The shoulders are done with ball joints so the arms have an impressive range of motion. Both legs seem to be made of one piece, so kicking up one leg raises up the other. Besides that he also has articulation at the neck and wrists. Not that this is a Hawkman review or anything, but he wasn’t articulated at the wrist; I just thought that was interesting. 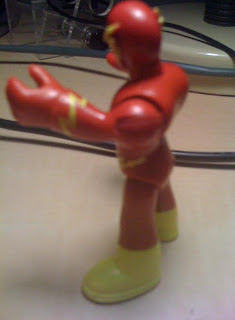 As a Flash fan the other thing that stuck me as odd was the way the belt is applied. I’ve got a ton of different Flash figures and I don’t think any of them have a belt that stops at the hips. My picture doesn’t really do it justice here, it stops the lightning from really being a belt and is more like a piece of decoration hanging out on his waist. It goes just far enough around that you can’t tell if you are looking at it head on. 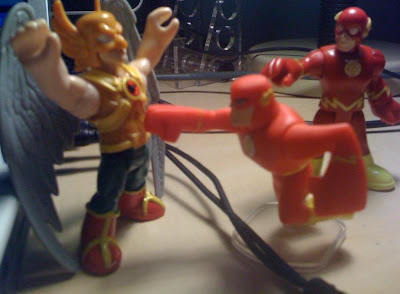 That’s it. I told you it’d be a short one. I’d find something else to add to this, but my life outside of That F’ing Monkey has been kicking my ass this week so I haven’t had a lot of time. You didn’t see it affect the site much because I had some things written in advance. Oh yeah, I almost forgot....Kapow!
Posted by Ken O at 7:45 AM