It’s Hangover Thursday, how’s your head? I had a fantastic night of drinking cheap beer and watching some amazing hockey. Some of the games went the way I wanted them to; others did not. Much like yesterday was a bunch of small, random things. Hangover Thursday is going to do the same, but all the items are going to fall into the Spooky or Strange category. 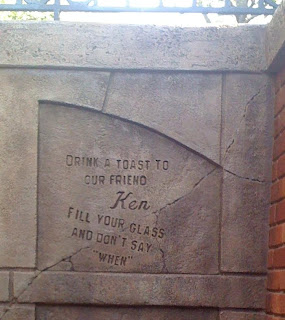 Spooky: Tuesday I mentioned that I had checked out the new changes to Disney’s Haunted Mansion. For those not obsessed with the goings on of the Magic Kingdom; the queue line and hitchhiking ghosts have just been totally redone for the Mansion. I think both updates are big improvements, but the coolest update is pictured above. Drink a toast to our friend Ken. Fill your glass and don’t say "when.” It was like they wrote it just for me. I wonder if they’ll let me put my ashes behind it when I die. 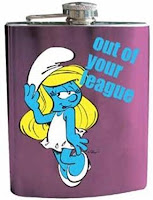 Strange: Smurfette on a flask. I know we’re about to be buried in Smurf merchandise with the movie coming out, but this just seems weird to me. Now I realize anything could be put in a flask, but when I see one I think of hard liquor. They hold so little that you have to fill them with the most potent alcohol don’t you? Slapping a cartoon character on a flask just seems strange to me. I’m not offended or anything, hell I’m not even against the idea, it just like an odd marketing choice.

Spooky: TShirt Bordello is selling these amazing glasses. The Winchester Tavern glass is a pint glass and the Overlook Hotel glass is a pilsner glass. Having one of these in your possession will make you look stylish as you fight off zombie hordes or get driven mad in an empty hotel. These things look amazing. I love when you can subtly geek out. The Winchester one is probably in my future.

Strange: Superhero pint glasses are cool. I don’t have a lot of them, but I’d love to have a nice collection. Superhero shot glasses are even better, all the coolness but easier to store. What happens when you have a bunch of people over and they all want to drink out of Spiderman shot glasses? Well if you have the Spiderman shot serving tray you can serve yourself and seven friends with ease! This thing is so strange that I’m having a hard time writing this and I’ve know about it for a few weeks. I would have loved to have been in the marketing meeting where someone came up with this. Despite all my confusion, if there was a Flash one I’d buy it in a nanosecond.
Posted by Ken O at 9:27 AM