Happy Flash Friday everyone! For weeks now I’ve been teasing that I was going to be doing something Kid Flash related. Other things happened, announcements were made, and the poor Kid Flash article kept getting pushed back. Today we’re finally getting to Kid Flash’s costume change and the very strange turn it is going to take. For those hardcore Flash historian’s there won’t be many surprises, just sit back and enjoy the strange trip we’re about to take I suppose. A final note before we get started, my home pc is having some issues; so I wasn’t able to scan the panels you’re about to see, I had to take pictures of them on my crappy camera. So the quality is a little subpar. Sorry about that. 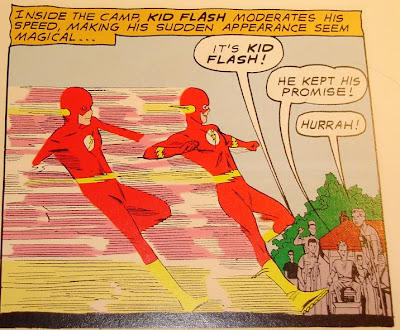 Wally West was given his powers when lightning hit the exact same chemicals that had given the Flash his super speed. Not the most exciting origin and certainly not original, but it works. Things like the Speed Force wanting him to have the powers or Wally actually being the lightning bolt only confuse the matter. What is more important for today’s article is that Barry was so happy to have a teen sidekick that he made Wally a suit that was identical to his own. This is way before the inclusion of straight belt versus v-belt or the bright red versus dark red debates. The only way to tell them apart was the height difference.

Someone must have realized just how confusing that could be because everything was about the change with Flash issue 135, Secret of the Three Super-Weapons. Like a lot of the Silver Age Flash stuff the story is an odd Sci-Fi story about invaders from another dimension. The reason this one stands out from the other Barry saves the world from aliens story though is the panel pictured above. Because when you’re supercharged with alien energy it will obviously change the clothes of anyone who comes near you. 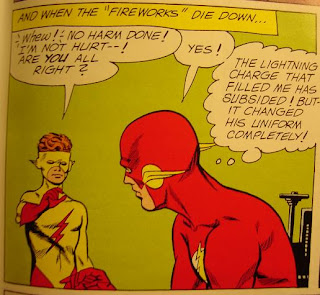 Seriously, in the very next panel we see that Barry is drained of this new found energy. The writers shot Barry up with power just to explain Wally’s costume change. I’m sure there are stranger costume changes in the history of comics but this has to rank pretty high up there. Do you think Wally ever took Bart aside and told him the origin of the design? Obviously the invaders were defeated and sent back to their dimension, but the costume redesign is the real star of this story. 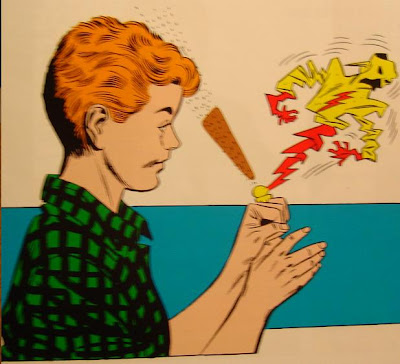 In all honesty, I’ve never been a big fan of the Kid Flash costume. Maybe it’s too much yellow, I’m not sure. But there is one thing about its original appearances that I absolutely love. Above is a frame of Wally triggering his costume ring. You can see the yellow suit spring out to the right, but what is that flying towards Wally’s face? The answer is better then any joke I can make. It’s brown hair dye. There is no explanation as to how it only colors his hair.  From the look of this panel he'd end up with a brown forehead. 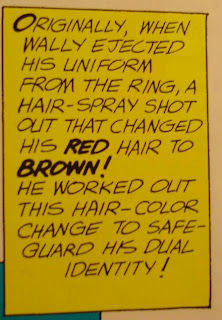 To make sure no one could recognize it was him, Wally West used to dye his hair brown. When he switched out of his costume another spray removed the dye.  You'd think that would be pretty messy.  Maybe it was like a quick shower after every fight, that would be refreshing I suppose.  By now you should realize I have the maturity of a 6 year old, it took everything in my power not to name this update "Kid Flash Makes Brown." 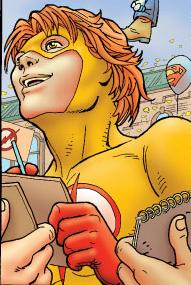 Evidently there is an issue with people getting Bart’s hair color right in a lot of his recent appearances. Now I’m way too color blind to really notice these color mess ups unless they’re pointed out to me, but the hair complaints immediately made me think of Wally’s quick dye jobs. Maybe Bart has decided to start stocking his costume rings with red dye.
Posted by Ken O at 9:36 AM