It is going to be a hockey heavy week here at That F’ing Monkey. As Brandon pointed out yesterday that playoffs start this Wednesday. The hockey season is so long that it is usually broken up into three parts; the season start, post all-star game, and then playoffs. Obviously the playoffs are the most fun to watch. We will be rocking the beards this season to show support to our favorite teams.

How this is going to work is pretty simple. You’ll see the starting pictures in this article. My picture was taken Monday while at a trip to Disney (had to check out the new Haunted Mansion changes). The last time I shaved was Sunday Morning. Brandon’s picture was taken Sunday. After each round of the playoffs is completed we’ll take pictures of the beard progress until our team either wins the cup or is eliminated. I’ll be representing the Red Wings and Brandon the Lightning. If you’re interested in showing your beard growing prowess and want to support another team drop me an email.
I realize there are probably some non-hockey versed readers out there wondering just what all this beard talk is about. The New York Islanders started the practice in the 1980s and won the Stanley Cup four times in a row. Only Montreal has a longer consecutive cup streak with 5. The Islanders rocked the beards but after that the idea just seemed to be forgotten. Ten years later, in 1995, the New Jersey Devils brought it back though. After that the flood gates were opened and the NHL firmly embraced the playoff beard. In 09 Detroit even it as part of their playoff marketing. Not all players do it of course, some don’t believe in the superstition and some just flat out can’t grow a beard. I think it’s a fun tradition through and seeing some of the normally clean cut guys turn into Grizzly Addams is always good for a laugh. 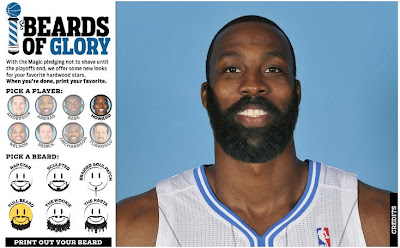 I don’t like the fact that the Orlando Magic has jumped on the playoff beard train. I have to admit I’m not a basketball fan in any sense of the word. Regardless of that, I like to see the Magic do well. I feel for them.  Orlando is a hard on its sports teams. Most Orlando residents come from somewhere else and bring their love of their own home team here with them. So while there are die hard Magic fans, they are far outnumbered by the fair-weather ones. I understand that, while I like to see Tampa Bay do well, I was born up in Detroit and stay loyal to the Wings.  So the Magic have to battle to keep the town intrested in them.  I get they want to drum up some local support, but please lay off the beards guys, leave it to the hockey players.
Posted by Ken O at 8:31 AM