You’ve probably already seen the commercials for Team Bondi’s game L.A. Noire, the 1940s mystery game coming out on May 17th. Obviously I’m excited. If a game is going to let me follow in the steps of characters like Phillip Marlowe and Mike Hammer I’m all over it. Instead of being a private dick though, you’ll be playing Cole Phelps who works for the LAPD. My pre-order is already in. If you haven’t pre-order yet and plan to, let me help you out a little bit. Because there are numerous pre-order bonuses out there, I’m listing all ones I could find. 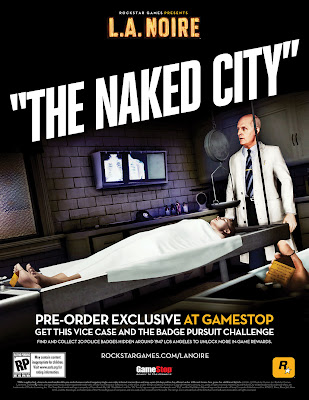 Gamestop
"The Naked City" Vice Case
In this bonus case from L.A. Noire’s Vice Desk, detective Cole Phelps investigates the supposed suicide of a stunning fashion model. Can you help Cole unravel the truth in a city blighted by drugs, corruption and greed, where the death of a beautiful woman is never as straightforward as it seems.

"Badge Pursuit" Challenge (include Button Man suit)
Hidden around L.A. Noire's beautiful recreation of 1947 Los Angeles are 20 police badges to find and collect. If you can find all 20 of these badges, the dapper Button Man suit will be unlocked which provides extra ammo for all weapons. Each badge also provides 5 additional XP which will help further unlock Intuition Points – special credits that can be used to give Phelps a key investigative insight when you need it most.

GameStop PowerUp Rewards members: The Chicago Piano Exclusive Gun
The Chicago Piano, used by both law enforcement officers and criminals, was favoured for its reliability, ergonomics, compact size, large 45-round cartridge, and high rate of automatic fire. This bonus weapon will be stored in the trunk of Detective Cole Phelps' car throughout L.A. Noire, ensuring that extra firepower is always close at hand. 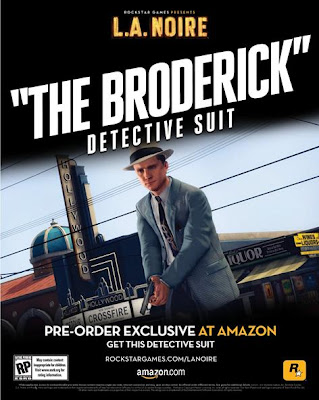 Amazon
The Broderick Detective Suit
This unlockable detective suit boosts your fist-fighting capabilities and resilience to damage. Throughout L.A. Noire while working cases, you'll encounter quite a few suspects and persons of interest who prove to be resistant to arrest. Your hand-to-hand fighting skills will be called into action on these cases – the Broderick suit with its enhanced fighting abilities may be that edge in helping make that collar. 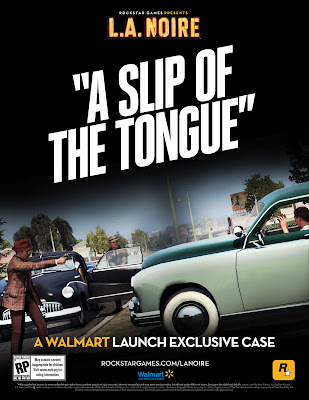 Walmart
"A Slip of the Tongue" Traffic Case
"A Slip of the Tongue" is a bonus case from the Traffic Desk in which a seemingly run of the mill car theft ends up sparking an explosive investigation into the largest auto fraud racket the city has ever seen. With the stolen cars piling up and questionable characters at every turn, can you help Cole Phelps crack the biggest case so far in his career? 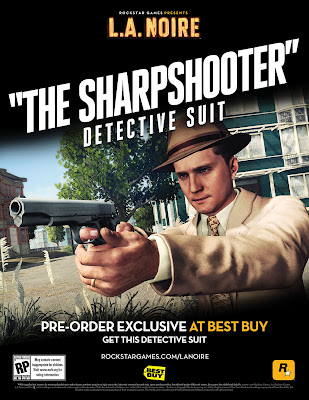 Best Buy
"The Sharpshooter" Detective Suit
The Sharpshooter unlockable detective suit enhances your aim with rifles and pistols. Always a worst case scenario for any detective working a case, there are of course those occasions for Cole Phelps when pursuing a suspect escalates to gunfire. In these tense shootouts, the Sharpshooter suit provides that extra aiming precision to take the criminal down.


That’s all the bonuses I know of at this moment. There were rumors of a PS3 exclusive DLC, but all mentions of that have been wiped away. I’d expect a “surprise” announcement about it as the game’s release date nears. Also if you don’t want to jump on the pre-order bus, it has been said that all the pre-order incentives will later be available as paid DLC.
Posted by Ken O at 6:42 AM