Yesterday we looked at the first half of DC Super Friend’s episode The Joker’s Playhouse. All of the heroes were in trouble. Today we’re going to finish the episode off. So if you haven’t read part one, click here. I got the episode on a DVD packed in with the Green Lantern Jet but you can also find it on Fisher-price.com if you go to their Imaginext section of the site. 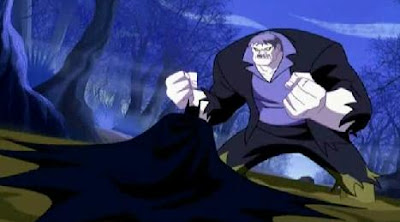 Picking up where we left off we see Batman and Superman have been fighting mud monsters the entire time the rest of the Super Friends have been doing other things. Superman is getting weaker and weaker as time goes by. During the fight he punches the ground so hard that the holograms flicker and Batman sees where the control panel is hidden. Solomon Grundy intercepts Batman but Superman moves in to distract the big guy while Batman goes to work. 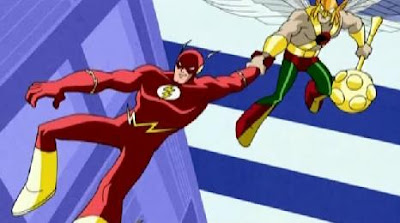 Hawkman is still fighting Grodd when Flash calls him for help. The winged warrior proves himself to be the most competent person in the episode having not actually gotten trapped anywhere. He dispatches Grodd with ease and pulls Flash out of the gum. The two of them then break into Cyborg’s room and help him fight off the video game enemies attacking him. Flash’s jokes during these segments are atrocious. He tells Hawkman to leave the jokes to him, but they really could have just been dropped instead. 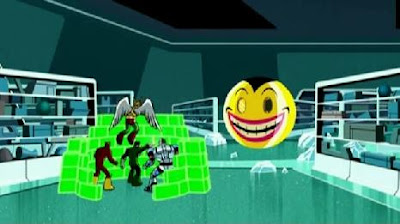 The group then uses Cyborg’s scanners to find where Green Lantern is. Mr. Freeze is walking out of the door just as the Super Friends are walking in. Freeze is encased in a block of ice and Hawkman knocks one of the eyes out of the Joker smiley face so that the Green Lantern can escape. Hal uses his ring to make a brick wall to protect everyone but the smiley face only throws confetti everywhere and leaves a sign that says, “Fooled you!” Cyborg’s scanners pick up Batman and Superman this time so the group heads over to rescue them. 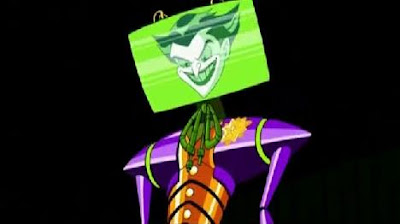 Superman manages to hit the holograms hard enough that everything phases out again. Batman uses that moment to destroy the control panel. Just as all the holograms disappear the other Super Friends break into the training room. Batman states that the control room is the only place that the Joker could cause all these problems from and the gang head over there. Joker is waiting for them and uses the equipment in the control room to make a giant Joker robot! 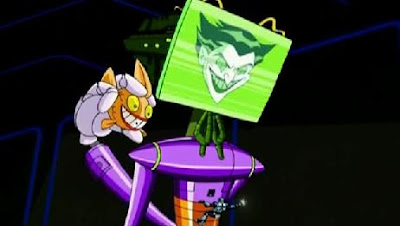 The giant Joker-bot destroys the Super Friends one on one. Superman flies up and is hit with red sun radiation. Hawkman tries the same and is glued to the wall with another of those gum pies that the Flash was stopped with. Joker’s flower turns into a yellow saw blade and destroys the Lantern’s constructs. Flash is wrapped up tight in multi-colored streamers. Cyborg tries to short circuit the robot but is hit from a blast of water from a toy fish. Things look bleak again. How will the Super Friends survive? Check back tomorrow to find out!
Just kidding, we’re wrapping this one up now! 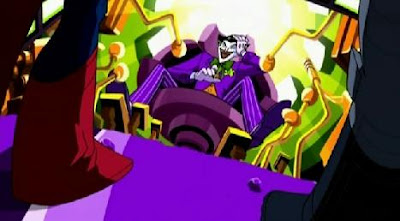 Remember how I said this cartoon makes Hawkman the bad ass of the group? He realizes they need to use teamwork to take out the robot. Hawkman flies Batman in close who then blows up the radiation ray on Superman. Superman then destroys the yellow saw blade keeping Green Lantern pinned down. Green Lantern makes a pair of scissors that cut the Flash free. Flash runs Cyborg up the robot body and makes the robot dizzy. Hawkman flies up and knocks the head off the robot! Superman opens the downed robot’s chest up and we see the Joker has been piloting it all this time. 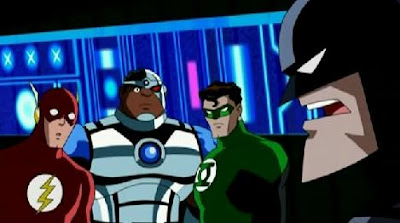 The heroes talk about how important team work is and Batman states that’s good because they are all going to have to pitch in to clean up the mess the Joker caused. Everyone quickly make excuses and run out on the Bat, who sadly wishes Robin was there to help clean up. 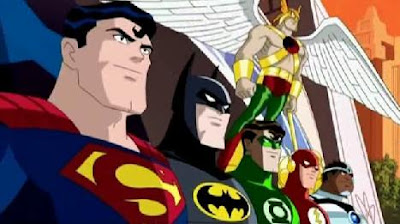 And that’s it! The episode wraps up with everyone running towards the screen like the old Super Friend’s cartoons. I thought this was going to be horrible and was so pleasantly surprised. I want more of these things! Add it as a reoccurring part of DC’s new animation block. Please, we didn’t even get to see Wonder Woman, Aquaman, or Robin in action yet! I need some more DC Super Friends.